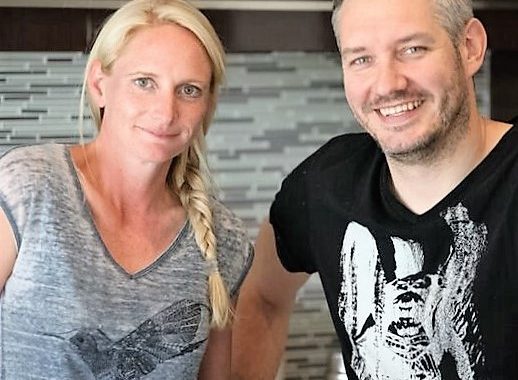 The Farmer and the Cook – An Australian Lamb Bacon Story

It all began with a Farmer who is passionate about providing the very best, sustainable Australian White lamb to her customers in ways that haven’t been considered before and a cook who is passionate about his BBQ kettle and cooking low and slow. His dinner guests are always surprised and delighted by his creations with rubs, marinades and special wood smoking techniques.

Together they started the Australian Lamb Bacon Story

The farmer, Toni Barton, breeds Australian White Lamb, it is considered the Wagyu of lamb meat with a beautiful marbling that renders throughout when cooked. Giving you the most tender lamb you’ll ever eat. Toni’s property is 80km north of Melbourne and is well known for providing excellent quality produce to her growing customer base. While she has been breeding lambs for just four years, she has been in farming most of her life.

The cook, Jon Bell, now proudly officially Australian after acing his recent citizen test, moved here to play baseball from America 14 years ago. Jon is one of three members of the Full Metal Kettle BBQ Comp team. Jon knows nothing better than flavour combinations and wood smoking techniques that have broken the mould of traditional flavours. He cut his palate, so to speak, on creative cocktail mixing as a sought after bar tender in the states.  His cocktail creations are highly regarded and his reputation has carried all the way to Toni’s farm and her Lamb Bacon.

LamBacon™ launched with Toni’s Australian White lamb bacon which she sells at local farmers markets and on her website. However as demand grew through restaurants, retail stores and consumers she has secured the highest quality Victorian grass fed lamb to fill the supply.

Meanwhile, Toni still runs her property and is committed to the welfare of her stock and the environment and while Jon doesn’t play baseball professionally anymore, his days are filled with imaginative flavour creations that hit home runs.